In 1896, Émile Borel asked what can happen at the border of the disk of convergence of a Taylor series:

This is a vast and difficult question, but surprisingly enough, it has an answer for random Taylor series, which are series whose coefficients are random.

At first sight, it might seem difficult to study the behaviour of a function which is itself random, and one might be tempted to say that random objects have random behaviours; but as Borel hinted in his 1896 paper, randomness comes with averaging, and averaging rules out eccentricity. That's the surprising result I would like to show in this note: this result essentially says that most random functions cannot be extended outside of their disk of convergence.

The precise statement is below; it is due to the Polish mathematician Czesław Ryll-Nardzewski in 1953.

Inside the disk D(0,r), the power series converges, but this says nothing on what happens on the border of the disk or outside. Does f(z) approach a limit as z approaches the border, for instance if z→1? Does it erratically diverge? Are there some points on the boudary, such that f can be extended analytically around this point?

Think about the series ∑zn. Its radius of convergence is 1, but since the sum is equal to (1−z)−1, we can extend it at any point of the circle of radius 1, except at the point z=1; in fact, we can extend this function at every point of C∖1, even if the series representation only holds in the disk D(0,1).

What happens at the border

We say that a complex number w on the circle C1​={∣z∣=1} is regular if there is a δ>0 such that f can be extended analytically on D(w,δ). By the properties of analytic functions, this extension is unique. If a point is not regular, it is called singular.

The set R of regular points of f is an open subset of C1​, and among functions with a radius of convergence equal to 1, it can have very different behaviours:

This last case where R is empty might seem pathological; it is actually not. If R is empty, we say that C1​ is a coupure for f, following Borel's vocabulary.

In many of his works, Borel was interested in the behaviour of 'séries quelconques', as term he sometimes used to mean 'random'. A modern setting would be to take a sequence of (complex or real) random variables X0​,X1​,X2​,..., and define

This is a random analytic function, and its radius of convergence r=1/limsup∣Xn​∣1/n is a random variable; however, classical theorems in probability such as Kolmogorov's zero-one law say that when the Xn​ are independent[1], then r is almost surely a constant – possibly ∞.

Sometimes, this can be checked manually; this is the case for two common examples of random functions with a finite radius of convergence, the Rademacher and the Gaussian series.

Look at the behaviour of (two realizations of) these functions, inside their radius of convergence. 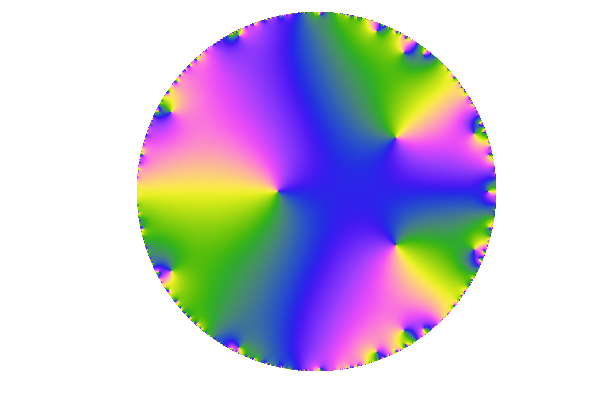 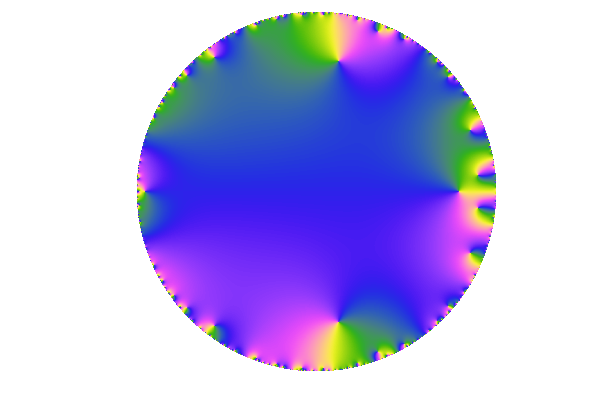 The Gaussian function is on top, the Rademacher function at the bottom. The small inset on the left is the color scheme for these domain colourings.

We can see a more and more erratic behaviour closer to the border of C1​, with denser zeros and windings. It is tempting to say that both functions have a coupure at C1​. That's actually the case and it's the content of the second part of this note.

When f is a random analytic function with a radius of convergence almost surely equal to 1, one can define R as the set of all points which are almost surely regular for f, and this set is an open set[2]. If it is empty, then f has a coupure at C1​.

If the Xn​ are symmetric random variables and if f(z)=∑Xn​zn has a radius of convergence of 1, then either every point in C1​ is regular, or C1​ is a coupure for f.

By symmetric, we mean that the law of Xn​ and the law of −Xn​ are equal.

Proof. Let us suppose that R is not empty. It contains a small arc interval of the circle, say {eit: t∈]a,b]}, and there is an integer m such that the arc length of this interval is bigger than 1/m. Now, if the Xn​ are symmetric, then for any deterministic choice of signs sn​=±1, the law of the random analytic functions

are the same as the law of f; in particular, if we set sn​ to be −1 if n≡k modulo m and 1 otherwise, we obtain a new random series fk​ with the same law as f. But

for some function g, which clearly satisfies g(ze2iπ/m)=g(z). So, the left hand side of the preceding equation almost surely has R as a regular set, hence so does the right-hand side. But since g is invariant by rotations of angle 2π/m, it means that the set of regular points of g must also contain e2iπ/mR, which contains the whole circle C1​; in other words, g can be extended outside C1​, and so does 2zkg(z)=f(z)−fk​(z).

In other words, either R is empty, or it is equal to C1​.

We now turn to the general case, where the distribution of the Xn​ is not necessarily symmetric; with a clever argument, we can actually symmetrize them and use the preceding result to get Ryll-Nardzewski's theorem.

If the Xn​ are random complex numbers such that f(z)=∑Xn​zn almost surely has radius of convergence 1, then only two things can happen.

(2) Or, there is a deterministic analytic function f~​ with radius of convergence equal to 1, and such that:

This was beforehand a conjecture, and it was proved by the Polish mathematician C. Ryll-Nardzewski; a few simpler proofs appeared afterwise. This one is notably simple and is drawn from J.-P. Kahane's book, Some random series of functions. The same statement actually holds on assumptions weaker than independence of the Xn​'s.

Proof. Let us suppose that we are not in the first case, that is, the set of almost sure regular points R is not empty. We introduce another sequence of random variables X~n​, which are independent of the Xn​'s and have the same law. We note F~(z)=∑X~n​zn their Taylor series: it has the same distribution as f.

Now, the coefficients of the random analytic function g(z)=f(z)−F~(z) are Xn​−X~n​, so they are symmetric and the preceding result applies: almost surely, g has a coupure at its radius of convergence s. Since both f,F~ have radius of convergence 1, we must have s⩾1: but can we have s=1? Well, since f and F~ both have a nonenmpty set of regular points on the circle of radius 1, it must mean that these points are also regular for g: if g has a coupure, it cannot be on the circle of radius 1, and we obtain s>1.

Now comes the end: since f and F~ are independent, we can essentially consider that F~ is not random... More precisely, conditionnaly on (almost every) realization f~​ of F~, the random function f−F~=f−f~​ has a coupure at s>1.

This last statement is actually much stronger than the statement of the theorem, since it means that there are many deterministic functions such that the conclusion holds: almost every realization of F~...

The last argument of the proof will be less shady if we allow an extra assumption: we can suppose that the Xn​ are L1. Instead of considering one particular realization of F~, we can simply average with respect to F~, which has the same distribution as f, so

The second case of the theorem now reads:

I recently stumbled across an example illustrating this: consider the case where Xn​ are independent Poisson random variables with parameter dn for some common d. Routine arguments show that the radius of convergence of f is 1/d, but in fact there is no coupure at 1/d. To see why, note that

By elementary concentration arguments, it is possible to prove that limsup∣Xn​−dn∣1/n=d​, and consequently f(z)−(1−zd)−1 has a radius of convergence equal to 1/d​, and the singularity at 1/d was really isolated. It is also possible to show that f(z)−(1−zd)−1 has a coupure at 1/d​, thus giving a full illustration of Ryll-Nardzewski's theorem.